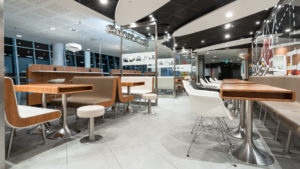 ROL Fredbergs would like to proudly present one of our latest projects that we have undertaken for McDonalds restaurants. McDonald’s in Sky City within Arlanda airport, has opened a new system where the food is cooked to order and guests are then served at the tables. “With our new ordering and cooking system and table service, we offer our guests an even better restaurant experience”, says restaurant owner Roland Edin. The new system is expected to reduce food waste by 20 percent. “This concept looks very nice”, says ROL Fredbergs project manager Anders Gillström. We asked some of the customers their opinion on the restaurant and they agreed with Anders. “This is a calm place to sit down to rest and refill with new energy”, says Kim, one of the early morning customers.
ROL Fredbergs was given the go ahead to undertake the Project management services for a new construction of a McDonald’s restaurant at Sky City. It is a very comprehensive project and its implementation took 9 weeks. Then followed 3 weeks of work on dismantling and restoring the room where McDonald’s had the previous restaurant at the airport. The project included elements such as floating flooring, laying tiles, building walls, electrical work, painting, installing furnishings, installing alarms, coordinating kitchen construction and installing payment equipment and more.
“What was a bit special and challenging about this project was that there are two very sensitive tenants who are neighbours to the restaurant we built, a hotel and a bank. This meant that jobs that sound a lot like drilling or sawing could only be performed during specially agreed times of the day”, says Anders Gillström. We also had to make certain adjustments during the project because the conceptual drawing did not always match the fire protection equipment of the premises. But we made these adjustments in discussion with Per Widmark of McDonalds, during the project, says Anders. Thanks to a good dialogue, this did not create any problems.
We would like to take the opportunity to thank Per for good cooperation and positive dialogue during the project. The restaurant has become a very nice dining environment and the new layout for both the kitchen and the staff room is working well. “A tremendous improvement over the old restaurant”, says our Project Manager Anders. The new concept that has been built at Arlanda is called “Airport” to signify that it is used only at airports. https://rolfredbergs.com/

We use cookies on our website to give you the most relevant experience by remembering your preferences and repeat visits.
Cookie Settings Accept All
Manage consent

This website uses cookies to improve your experience while you navigate through the website. Out of these, the cookies that are categorized as necessary are stored on your browser as they are essential for the working of basic functionalities of the website. We also use third-party cookies that help us analyze and understand how you use this website. These cookies will be stored in your browser only with your consent. You also have the option to opt-out of these cookies. But opting out of some of these cookies may affect your browsing experience.
Necessary Always Enabled
Necessary cookies are absolutely essential for the website to function properly. These cookies ensure basic functionalities and security features of the website, anonymously.
Functional
Functional cookies help to perform certain functionalities like sharing the content of the website on social media platforms, collect feedbacks, and other third-party features.
Performance
Performance cookies are used to understand and analyze the key performance indexes of the website which helps in delivering a better user experience for the visitors.
Analytics
Analytical cookies are used to understand how visitors interact with the website. These cookies help provide information on metrics the number of visitors, bounce rate, traffic source, etc.
Advertisement
Advertisement cookies are used to provide visitors with relevant ads and marketing campaigns. These cookies track visitors across websites and collect information to provide customized ads.
Others
Other uncategorized cookies are those that are being analyzed and have not been classified into a category as yet.
Save & Accept